A bit of variety

Just for a change this evening I wandered up the bridle path at Prestwick Carr. After a few yards beyond the x-roads I caught sight of three Tree Sparrows. The walk up to the second gate was quite uneventful as I noted that there has been a lot of grass cutting taking place.
At the second gate I watched a couple of Kestrel and a party of about ten Long-tailed Tits. Then in the gap between the north corner of the wood and the stand of dead trees a large bird hunted low and just above the vegetation. It was too far for me to identify but the upper wing colouring was rufous with the end primaries clearly black. It appeared a couple of times before I lost sight of it.
As the light was going, I headed back down the bridle path and was stopped at the sentry box by a couple of Emperor Dragonfly hunting back and forth under the trees. The evening was so quiet I could hear their wings clattering as they flew past
Back at the cross roads I could see that the Short-eared Owls had plenty of visitors so I wandered so far along the road and soon there were four of them heading my way and hunting  both sides of the road.
On returning a couple of bats flew just above my head beside the goat field.
Posted by Citybirding at 21:19 No comments:

On a couple of recent visits to Prestwick Carr I have watched the Short-eared Owl display where they spiral upward in groups and drift away to the west. I was a bit annoyed the last time because I failed to watch where they drifted. So tonight's plan was to observe from the gate on the main road and if they spiral again I'd be into the car and give chase. You've  guessed   it - they did get into a five bird spiral just before seven pm, but it was over the wood and they went off north.
Still there's always tomorrow.
However I did get some good sightings when one landed onto a fencepost at the bottom of the slope in front of me. 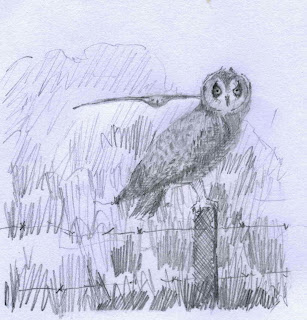 As I watched it through the bins a Kestrel came into view directly beyond the Owl,  just above  reed height, low and fast, and heading straight for the perched Owl. It kept coming and actually hit the Owl knocking it off the fencepost.
The Kestrel perched on the post, looking pleased with itself, and the Owl took off at a rate of knots.
There are many Kestrels and Buzzards to be seen also.
One bizzare sight was of four female Pheasants high up in an elder picking berries.
Posted by Citybirding at 20:48 1 comment:

I was unable to spot any perched owls at Prestwick Carr tonight but by 6.30pm the SEO were up in force. Six in a group, spiralling up into the night sky and a couple hunting low. Another reported on a fenceline but unfortunately I was unable to spot it, but a good total anyway. 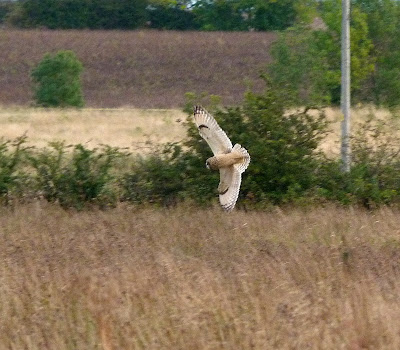 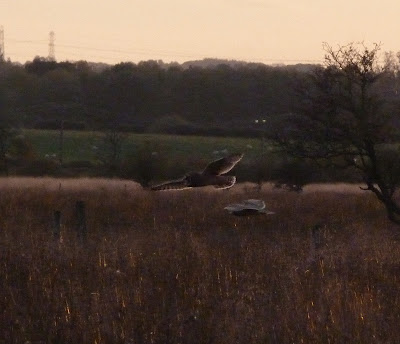 Posted by Citybirding at 20:25 No comments:

Went for a wander, around lunchtime today, along the bumpy road at Prestwick Carr. We managed to spot three Short-eared Owls and three Long-eared Owls.
The three LEO were all perched in different bushes and none of them gave a decent view - the tinkers!.
Two of the  SEO were perched together in the middle of the copse 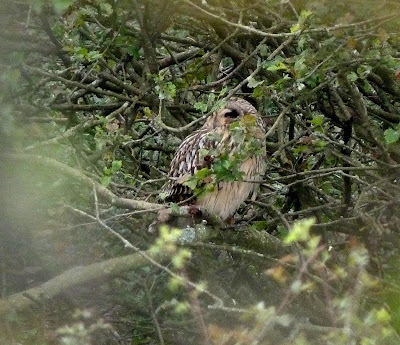 Posted by Citybirding at 18:10 No comments:

The eyes have it 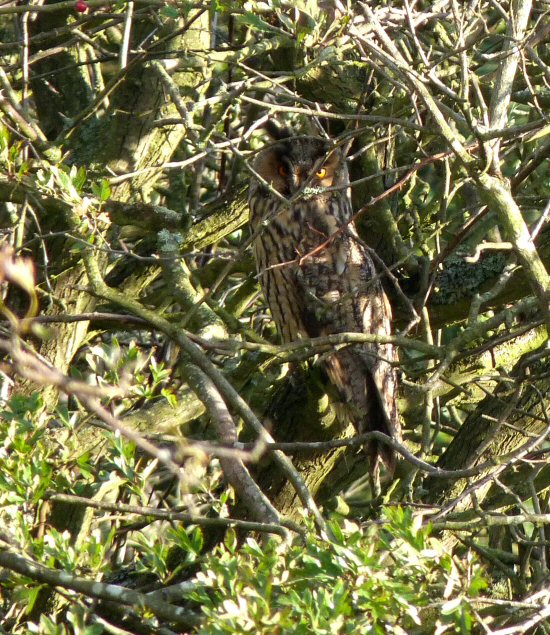 The Short-eared Owls gave us, a quite magnificent aerial display 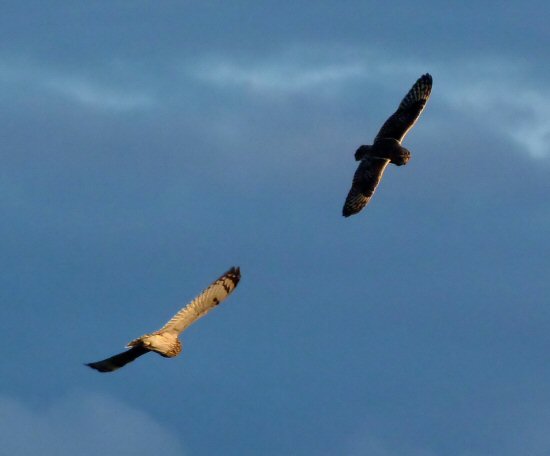 Another brilliant visit.
Posted by Citybirding at 20:09 2 comments:

The long and the short

Title credit to PCF on whose patch at Prestwick Carr, I had another great couple of hours tonight
First stop was to view a single Short-eared Owl as it sat on a fencepost where they had recently taken up shelter when the strong westerlies were blowing.
Tonight was quite still with evening sunshine so I wondered if they might be on the other side of the tree line basking, so off I trotted to the next gate.
Set up the scope and started to scan the bushes and quickly spotted some familiar colouring but then the ticker accelerated as I spotted what I considered quite long ear tufts.
Now, not having seen a perched Long-eared Owl, ever, I was in a bit of a dilema. I new Peter and quite a few others were just along the road, watching the Short-eared Owl, so a quick call and he arrived to confirm what I believed I was looking at.
I was a bit chuffed to say the least.
Not a movement for two hours other than to give the occasional squint out of the characteristic orange eye. 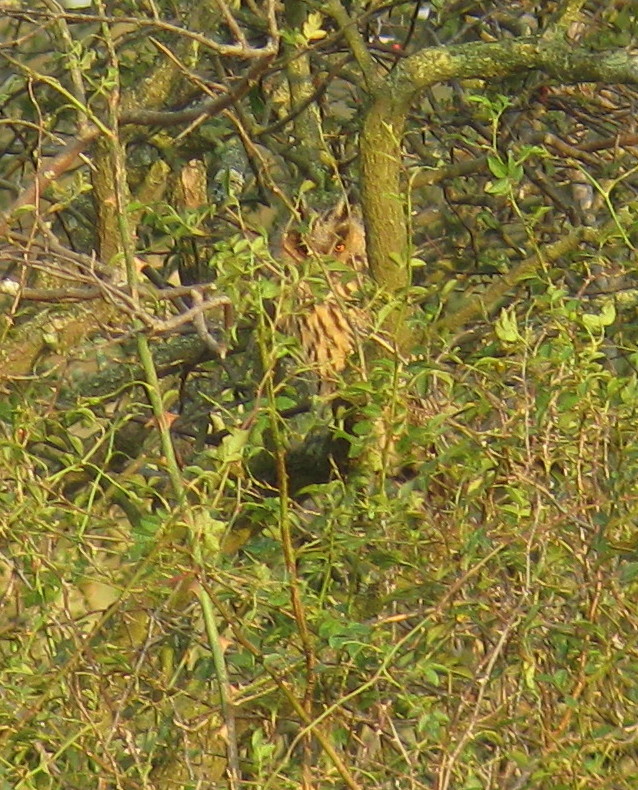 I think Brian may have managed to get a better digiscope shot.
There were some good views to be had of a Short-eared Owl hunting, where there appeared to be three or four about tonight by the time I left. 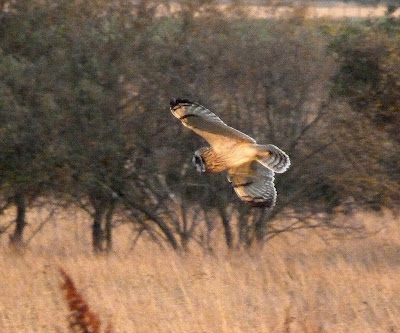 Thanks to PCF, and his persistence a few of us have benefited greatly at Prestwick Carr.
I arrived between 5.30 and 6.00pm this evening where Peter pointed out a single Short-eared Owl sitting on a fence post behind a protective tree line. It shuffled and preened for about twenty minutes then it was up and hunting. I find it surprising how a bird that looks short and stubby whilst perched, can have such long wings 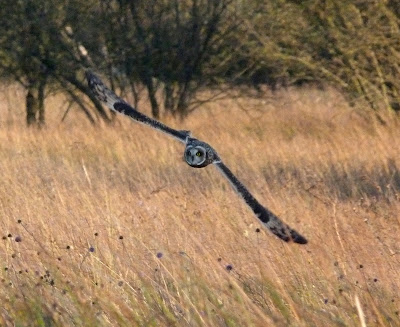 Not much longer and there were another couple, possible three in the copse.
This was great.
Then it was clear when there were four as two pairs quartered the fields giving some great views. Then as they do, they seemed suddenly to vanish, so I wandered along the road to get a clearer view of the fenceline.
I nearly fell into the ditch in amazement - there were four perched owls. 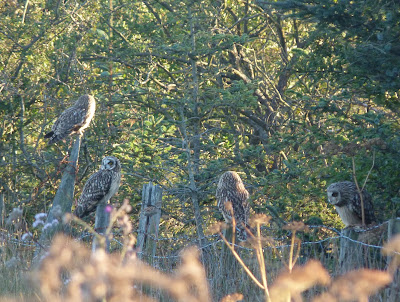 It was not much longer before they were all hunting again and eventually we all caught sight of a total of eight in flight at one time. 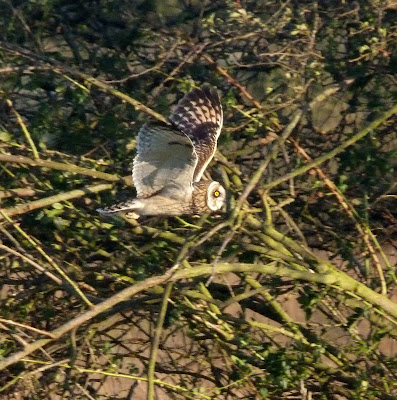 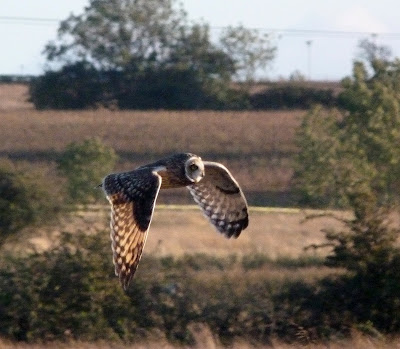 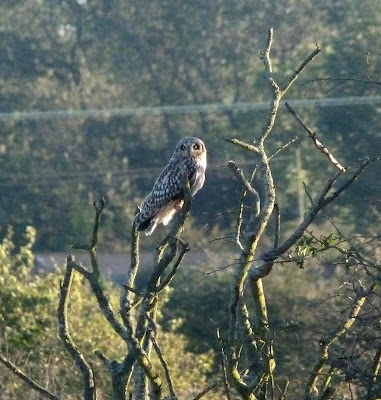 Look into my eyes

This corker paid the garden a visit this morning.  I dont think more words are  necessary. 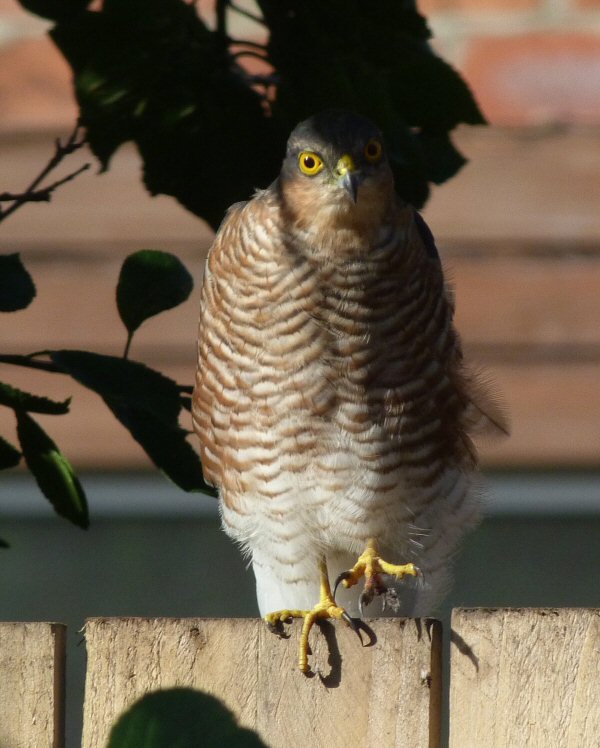 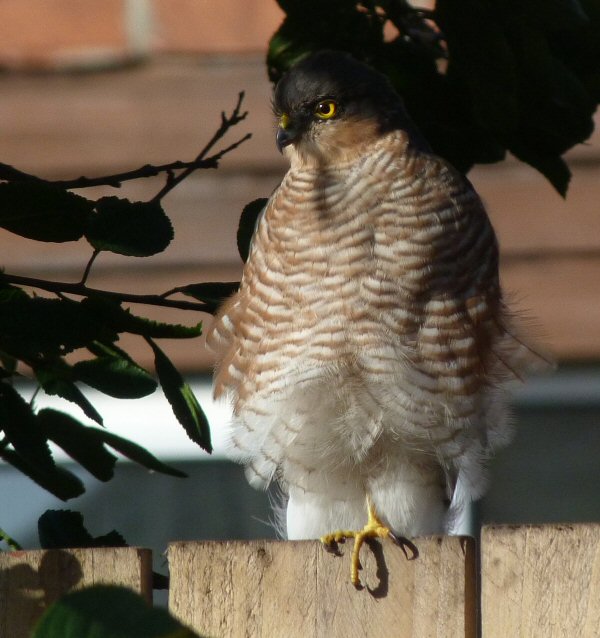 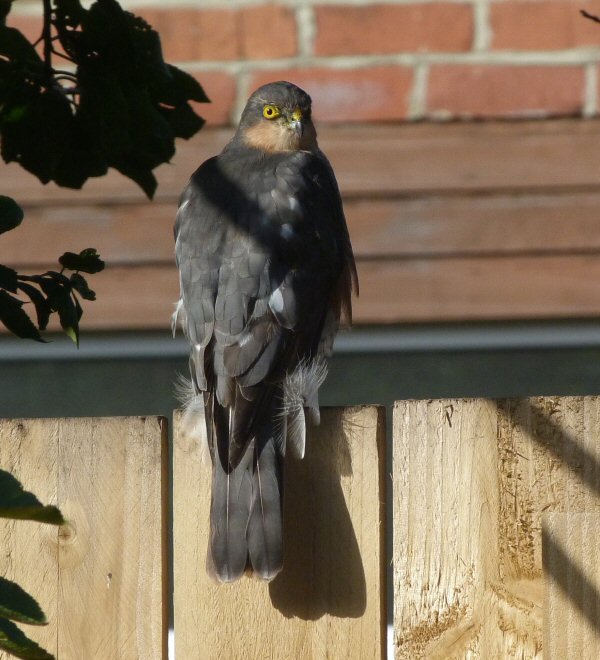 Friday and Saturday evening were spent in the company of PCF , loads of midges, and Short-eared Owls.
Friday had three owls showing well on the north side of the bumpy road as well as at least a couple more to the South. There must have been plenty of prey about since they had few wingbeats between dives

Saturday evening, most of Friday's crew arrived complete with assorted but numerous midge bites and it was proving a bit more difficult, but after enduring a spell of rain we had some horizontal rays of sunshine and soon enough there were four SEO perched along the same row of fencing posts.
Brilliant, just brilliant! 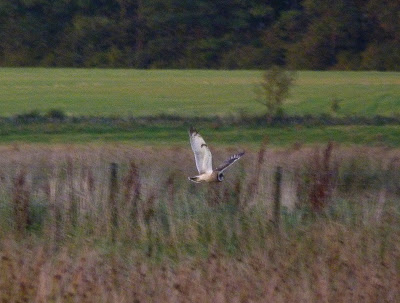 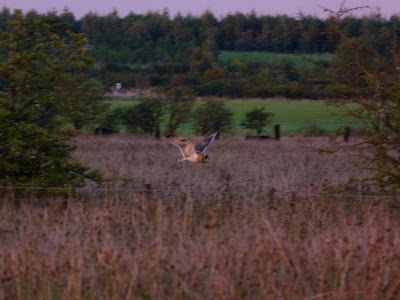 Posted by Citybirding at 22:43 No comments:

After a spot of friday lunch at Castaways cafe Seaton Sluice which included carrot cake plus cream, we headed down to St. Mary's Island.
Tide was well up so the Golden Plover, Turnstone and Lapwings were all close to the promenade.
There were a couple of Bar-tailed Godwit on the rock ends and then this one appeared at the North bay 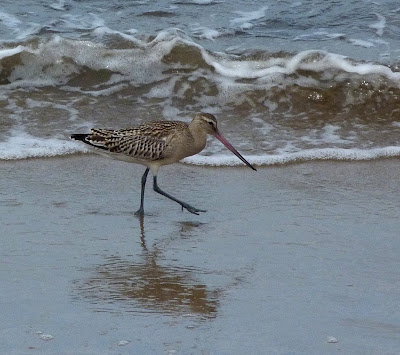 A lone Guillemot passed quite close 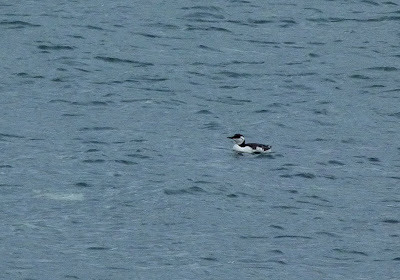 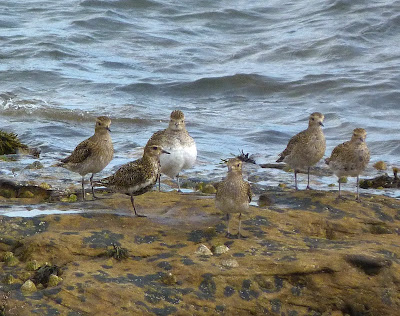 Posted by Citybirding at 14:56 No comments:

First time out for quite a while today with a visit to St. Mary's at lunchtime and then an evening visit to Prestwick Carr.
But before all that however, on my way to Prestwick Carr I stopped at the elevated viewpoint and caught sight of this bird which I thought at the time was a Common Buzzard but now I'm not so sure, so I would appreciate any opinions. 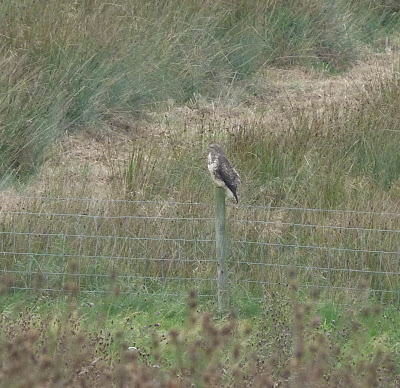 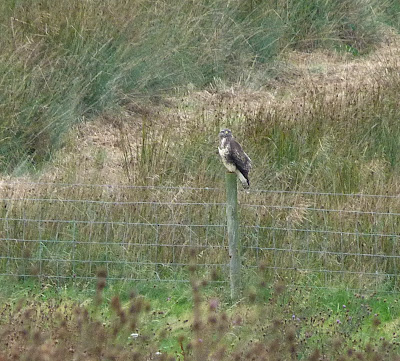 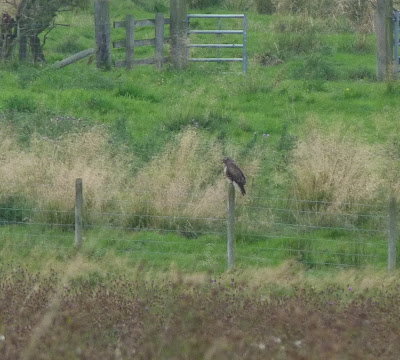