This afternoon I walked up the bridlepath at Prestwick Carr and was fortunate to see a large flock of Fieldfare, Redwing and Thrushes. I was unable to get within 150 yards of them as they kept ahead of me.
Two or three set down for a drink from the path pools 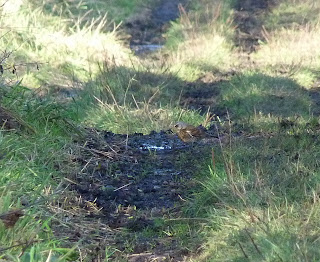 There were also many Kestrel and Buzzards whose numbers seem to be growing rapidly.
As a footnote one of our family members dropped in to see us today and said that they had been watching Snow Bunting at the top of the beach at Hauxley a couple of days ago.
Posted by Citybirding at 19:07 No comments:

Yesterday's visit to St. Mary's Island produced a nice flock of around 40 Sanderling on the South beach waterline. I managed to spot that one of them was colour ringed and took a few photos of it. 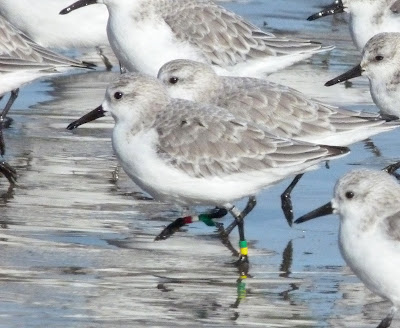 We took the opportunity this morning to go to St. Mary's Island just as the tide was dropping and just about clearing the walkway to the island. Lots of birds around including this Brent Goose which appeared to be all on its lonesome. 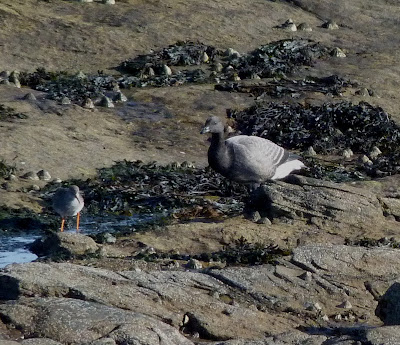 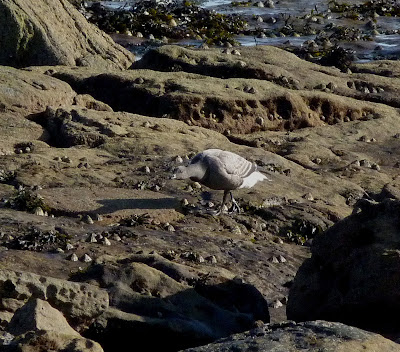 I understand that the lack of white neck patch, and the upper-wing coverts tipped with white, indicates that it is a juvenile
Posted by Citybirding at 14:20 No comments: 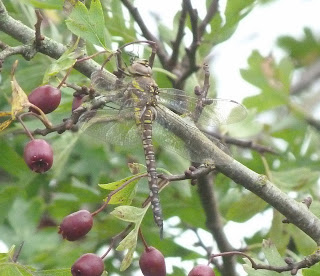 AND
a Golden-ringed Dragonfly which I was unable to photograph
Bullfinch, Great Spotted Woodpecker, and Buzzards were among some great bird sightings
Posted by Citybirding at 18:31 No comments:

Had a couple of hours before the takeaway opened so another visit to Prestwick Carr. When I arrived Bill was all on his lonesome but before long carloads were arriving.
I managed to spot a distant perched owl, which I was unable to distinguish between Long or Short since there were no eyes to be seen.
However after many pairs of human eyes it seemed to be agreed as a Long-eared Owl.
Over the period we caught sight of three other perched Short-eared Owls but  it was soon time for me to head towards the Queen Vic and the New Bengal.
Not having seen an Owl in flight on this particular visit I thought I'd add this painting on which I'm still working.
Am trying to record my memory of watching them taking off to hunt, from their well used fenceposts. 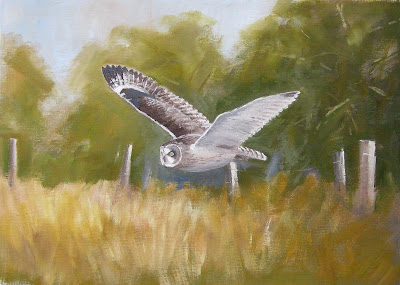 Posted by Citybirding at 19:20 No comments: