A pleasure to see.

For the last two winters we have been fortunate enough to have Mistle Thrush visit the garden. Last winter the two birds were quite bold and would often visit the feeder table whilst we were still within ten feet.
This year's visitors are much more suspicious.
Whilst they can just about see off the Blackbirds at the feeder table it is no match for the Starlings and seems to prefer to feeding off the ground. They spend ages sitting on the highest tv aerial before swooping down onto the garden wall and inspecting the food situation.
I've got fingers crossed that the Sparrowhawk does not pay them a visit, as it did this time last year - unsuccessfully!
So I've fast forwarded the pic to a springtime scene - here's hoping. 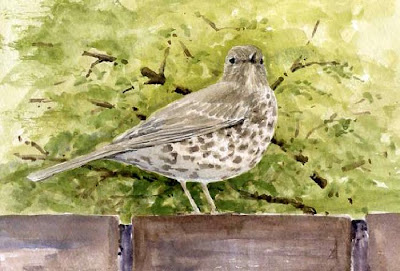 Posted by Citybirding at 20:35 No comments:

We had coffee at Kirkharle yesterday and was interested to note that the new lake which they have created is quite a significant size. It will be interesting to see what bird life it attracts over the coming months. Apparently the area should be open to public around May.
On the way back we spent five minutes at Bolam Lake watching many Blue and Great Tit feeding on the wall. They all seem very flighty and the slightest alarm from the Blackbird and they were out of sight, but it did not take long for them to reappear. 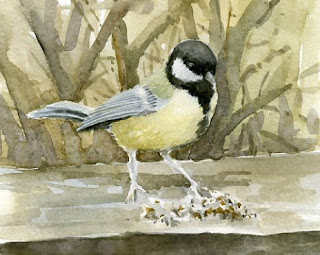 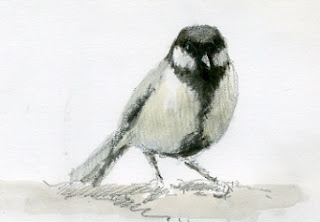 Not knowing when the Knot flock will be heading North, we went to St. Mary's Island to secure a few photos before they depart. They made their way into the North bay where I was fortunate enough to be able to grab some decent views.
I find it incredible to imagine that these birds could be be making their way to the Canadian high arctic and Greenland in the coming weeks 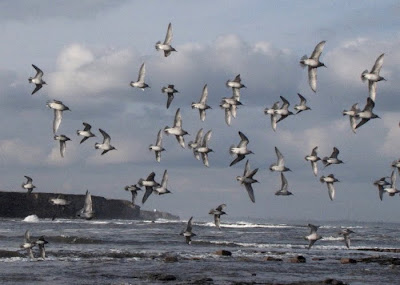 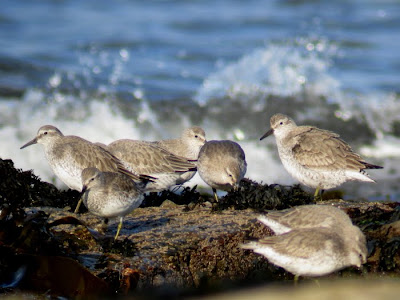 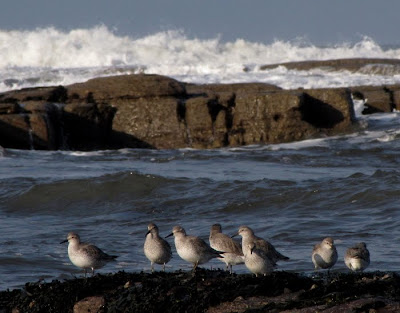 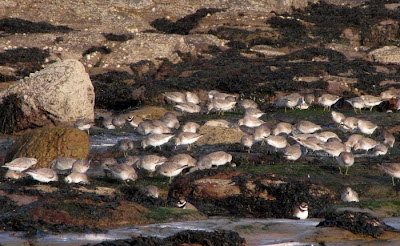 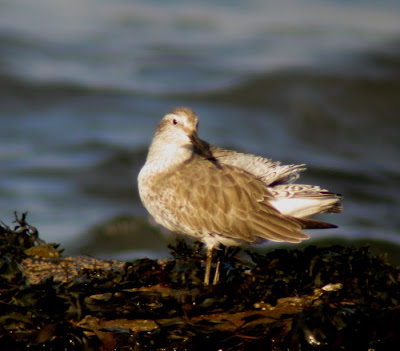 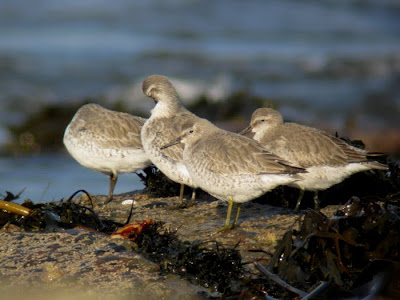 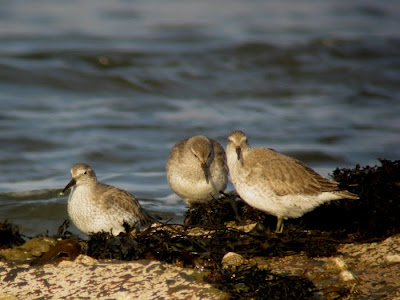 I have realised that in earlier postings I have afforded Redshanks little comment, but looking back over some recent photos I was surprised by the distinctly glowing red/orange legs and bills.
The first photo was taken at the St. Mary's north beach - 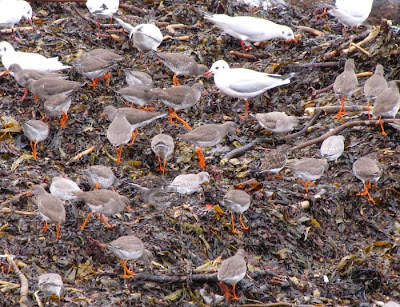 and this one at Boulmer 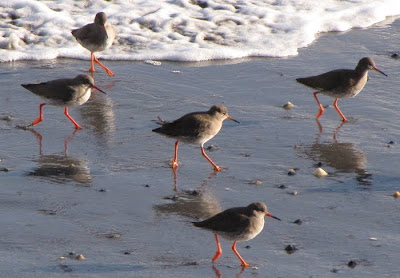 I suppose its another 'taken for granted' case, but I will try harder in future.
Posted by Citybirding at 11:25 No comments: 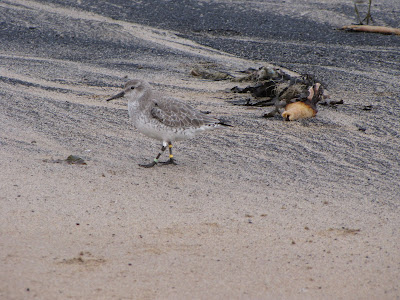 A response came back today and I quote

When you draw a straight line on the map its about 2000 mile from the ringing site to St.Mary's Island.

Just after lunch, quite bright, so thought I'd try some dodgyscoping at Prestwick Carr.
Within five minutes it was grey and raining, so much for scoping pics, but not to be put off.
As soon as I got out of the car all birds were aloft as this glided through. 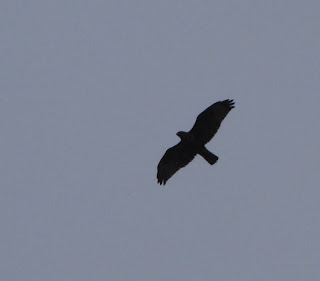 I presume a Buzzard but there was little light to see anything more than a silhouette.


Went up the bridle way although I could already hear from the shooting range that I would not get past the first sentry post. Over to the left the flock had settled and there were a lot of Golden Plover and Lapwing accompanied by a Shelduck and two Dunlin. 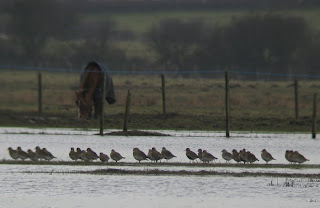 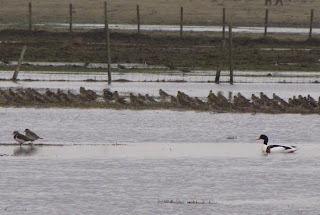 In the hedgerows were Long Tailed Tit and Yellow Hammer. Further north up the bridleway, I could see a Buzzard perched on one of the smaller hawthorn trees.
As I returned to the cross roads the flock were up again but this time I could not spot the culprit however the mixed flock flying display was quite impressive 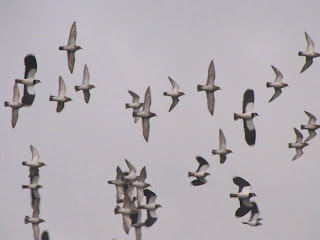 By this time there were five Greylags in the only field that held no water, and a further two flew over in an easterly direction. Three Kestrel were in the air at the same time.
So it didn't work out as planned but an interesting visit once again.
Posted by Citybirding at 18:04 No comments:

This female Blackbird looked quite indignant when I interrupted its bath time,
being the first morning for sometime when the water has not been frozen solid. 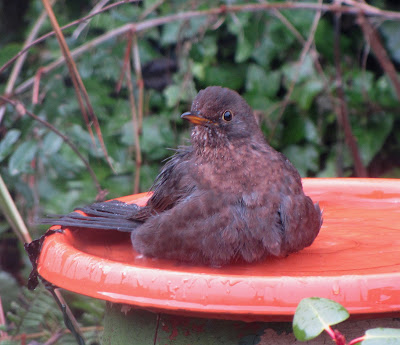 Was expecting to find Prestwick Carr all frozen up again when I dropped in for a short visit this afternoon.Earlier in the day for the first time ever we got the bus from home to Gosforth High Street because of the seriously icy state of the footpaths.
Not a hint of ice at the Carr, most puzzling.
Walked up the bridle path almost as far as it goes with most of the birds in the horsey field out of reach of the bins.
Ditches are quite full again and as I walked I came across 3 Buzzards (no big one) 2 Kestrel, Yellow Hammer, Long Tailed Tit, Pheasant, Mute Swan, Golden Plover, Lapwing, Common Gull, Black Headed Gull, 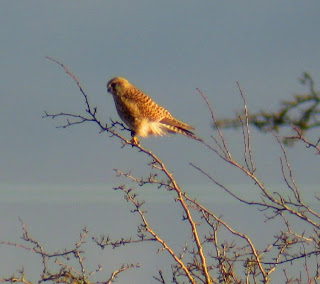 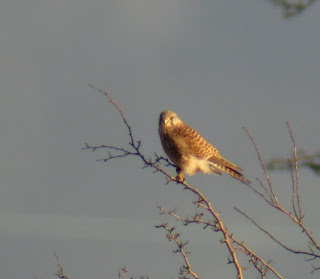 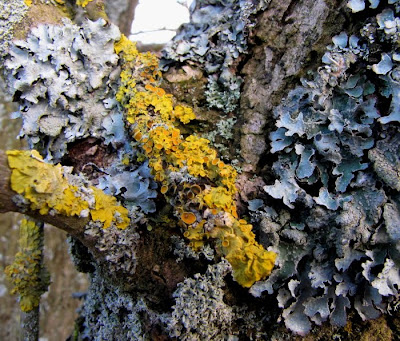 After I had been watching half a dozen Purple Sandpiper feeding near St. Mary's Island, I thought I would find out where they had travelled from. It would appear that those we see, have travelled south from their arctic tundra breeding grounds. After laying the eggs the male sits on the nest and raises the chicks.
There are two or three pairs that breed near the Cairngorms, Scotland. 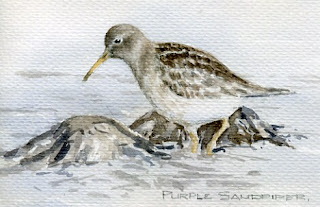 Its a smart bird.
Posted by Citybirding at 21:50 No comments: