Nowt to shout about to a lot of people, but a single Goldcrest working its way around the dead plantpots in the back garden made a welcome sight to us. 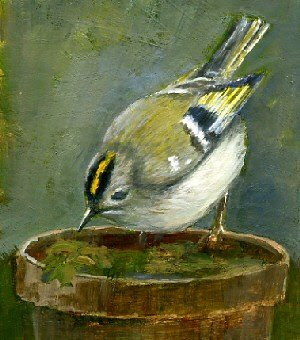 Our usual garden visitors , Coal Tit, Great Tit, Blue Tit, Robin, Wren and Blackbird have been a bit scarce over the last day or two.
We are at the end of a run of about 24 back gardens and often have a Sparrow Hawk sitting on the fence after a failed sortie, and I wonder if it has recently had some success.
Earlier today we were driving down the Derwent valley so thought we would stop at Thornley. Saw a couple of Red Kite, Wren, Coal Tit, Chaffinch, Nuthatch, Blue Tit, Great Tit, Half a dozen squirrel (grey) and a Sparrow Hawk having two failed sorties through the feeding area.
Posted by Citybirding at 16:17 2 comments:

Decided to do my Tyne circuit, starting Newcastle Business Park, Lemington Gut,River Derwent confluence, and Dunston Timber Beach. Arrived at river just after top of the tide, 4.5m, so there was no mud visible, but there were many Black Headed Gulls on the Dunston Staithes and a flock of about 50 Lapwing wheeling overhead looking for somewhere to settle and a couple of Cormorant feeding.
Went up to the west end of the Business Park but with no mud there were only 2 or 3 pair of Teal which took flight and across to the South side of the river,
With the scope I was able to see many Teal and Redshank sitting out the high tide on the riverside boulders from Dunston, past Costco and west.
So onto Lemington Gut with the first sign of mud showing and around 16 Teal, 20 Black Headed Gulls, 2 Black Backed Gulls, 12 Redshanks on the river outside the Gut.
Mud starts to apppear here when tide height is about 3-3.5m

Walked along the grazed field alongside the gut which although emptying was holding 10 Teal, 6 Mallard, 1 Grey Heron. In the bushes either side of the Gut were 8-9 Blackbird, Pair of Siskin (90%),Magpies and a few more little brown jobs that I was unable to get a clear view. The grazed area, kept trim by a few horses which are very keen to see what a camera tastes like, held a couple of dozen Curlew 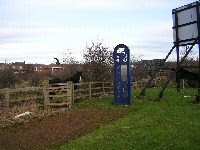 Enrance to field alongside Lemington Gut
and the odd Grey Wagtail. This area will be getting more visits as time goes by. 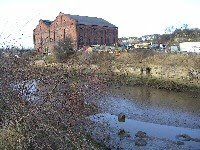 Onto The Derwent mouth where mud was just appearing with tide height 2.5m where there were Redshank, Teal, Blackheaded Gull, and a Black-backed Gull following a Salmon trying to make its way up the Derwent through the shallows, with tail an dorsal fin visible .Black smoke and an explosion behind The Skiff was the signal for the birds and me to scarper this spot.
All the usual birds, Teal (there are hundreds of these birds on this river stretch)Redshank and Black Headed Gulls, lined the wateredge behind Costco.
A bow wave moving down stream caught my eye, strange since there was no animal visible. Then a seal head appeared.
Last stop Timber Beach Dunston and there it was again, except this time there were two seals at the waters edge. So right up until the last, nothing out of the ordinary, then two seals at Dunston.
Posted by Citybirding at 16:00 No comments:

Yesterday we decided to get some of the Xmas pressies delivered to the family in Stocksfield so took the opportunity, when passing, to visit Sled Lane pond just outside Crawcrook. 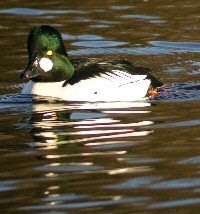 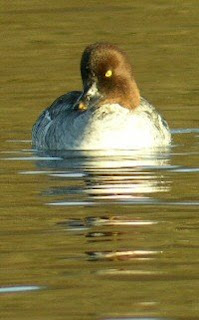 Goldeneye
Although the pond was 60% frozen there was a nice mixture of birds with Goosander,Goldeneye,Little Grebe,Tufted Duck and many Mallard,Moorhen,Coot, Blackheaded Gulls.
So decided to give a return visit today to try to get some pics. On arrival the pond had even less open water and had expected some no shows but apart from female Goosanders having gone awol they were all still present.

Goosander
With ample parking outside Bradley Garden nursery and just at the end of the pond this is an easy spot to visit.
Posted by Citybirding at 16:03 1 comment: 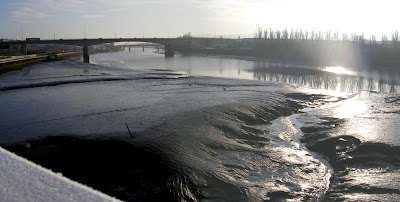 Had never had a look around the Lemington Gut area so Saturday morning, with the fog clearing, parked the car in the layby under the A1 on the north side of the river Tyne. Tide was well out and the mudflats at the entrance to Newburn Industrial Park were well populated with Teal, Redshank, Black Headed Gull, Curlew and Cormorant in the river. Lemington Gut looks like a place worth putting some time in early next year, with a mix of tidal conditions and trees and undergrowth lining both sides. 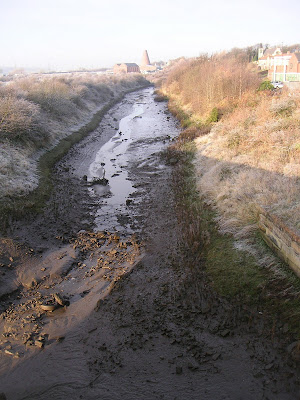 Made my way along the riverside path at the Newburn Ind.Estate and there were many more of the same birds along the waterline, with Wren,Chaffinch,Blackbird,Blue Tit, Robin amongst the riverside bushes.
Having sussed out the places to return to I made my way across the river to Derwenthaugh Staithes where again there were Teal, Redshank, Mallard, Little Grebe,Cormorant working the area where the Derwent meets the Tyne. 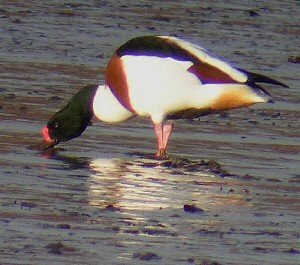 One last stop on the circuit at Dunston Timber Beach which was almost deserted apart from a few Redshank. But a couple of hundred yards upstream, a pair of Shelduck. Their bright colours contrasting starkly with the river mudbanks. Managed to get the scope on them and got couple of pics. 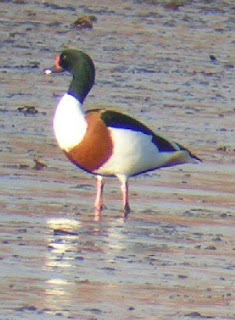 So not a bad end, together with identifying some new birding locations.
Posted by Citybirding at 18:48 No comments:

Have not been able to get out watching anywhere apart from keeping an eye out while travelling around town. So its Fieldfare, and Blackbird flocks on the edge of the Town Moor yesterday, Sparrow Hawk over Hunters Moor and two large skeins of geese seen heading upstream River Tyne today, which were too far away for me to identify.
So with such a poor blog offering I thought I'd add a recent painting of one of my favourites -the Snipe, 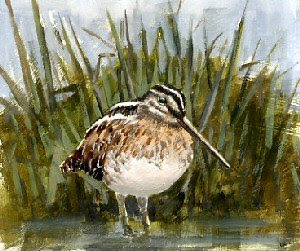 Posted by Citybirding at 15:43 No comments:

Caught a quick glimpse of a Grey Wagtail in Leazes Park a few days ago, so thought I'd do a painting sketch -

Posted by Citybirding at 17:38 No comments:

I had never had a look at the River Derwent and Tyne confluence, so parked at B&Q carpark Swalwell and headed downstream on the Eastside path. Having recently just failed to get a couple of Goosander pics in the Exhibition Park, I was delighted to come across two pair on the river beside the Radio Metro building.

The pics are not great but the birds colours were great. While getting these was surprised to see a Tree creeper working a riverside tree trunk. On reaching the river mouth at least I have established that I need to be there earlier in the rising tide since there was little mud showing and zero waders.

I was there 3hours after low tide, so next time I reckon I need to be there from low tide to two hours after, or more important between tide heights of 1.5 - 2.0 metres .Loads of birds on the Scotswood side of the river.
On the way back apart from two Little Grebe and four Mallard nothing to report.
Went onto Shibdon Pond. 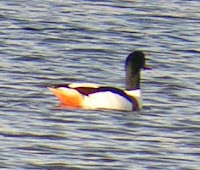 All the usual Shibdon suspects,Teal,Moorhen,Coot, Lapwing,Blackheaded Gull including Shelduck which managed to get head down on every pic I took except one.
Posted by Citybirding at 19:27 No comments:

Had twenty minutes to spare in town this morning so dashed up to Leazes Park. Just before reaching the pond there were around 15 Blackbirds scratting around in the leaf litter. 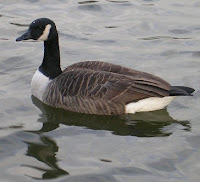 Did not have time to do a count but loads of Black headed gulls, Mallard, Mute Swans, a Heron on the island, two pair of Tufted Duck, and about 10 Canada Geese.
Always feels a bit of a cheat coming here since a lot of the birds come to you, but you can never be sure what else has dropped in. Just realised that most of the birds were just about the right colours for being so close to the Leazes End. 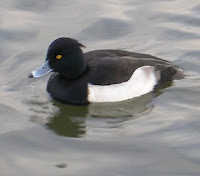 As I was walking away I looked over toward the RVI and there were 3 Mute Swans coming in over the hospital. As they swung around to drop, everything below just scattered and I could not help thinking

On my way into town and thought I'd get off the bus early and wander through the Exhibition Park to see what was on the pond. 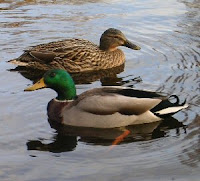 The answer quite simply was not much. With only 8 Mallard and two Tufted Duck and a few black headed gulls. But just before I left a female Goosander dropped into the water. Unfortunately I had only my little digi camera and could not get near enough to get a worthwhile pic.
Posted by Citybirding at 19:33 No comments: 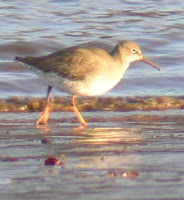 Arrived at South side of the river about 8.30am with early sunlight.
Had a look around the Dunston Staithes mudflats and the area around where the Teams enters the Tyne. At these points there were small numbers of Redshank, the odd Teal and Curlew.

Followed the river as far as the back of Costco where the were more of the same plus
Lesser Black-backed gulls.
Could see that there were larger numbers on the flats on the Newcastle side of the river although with the sun position it is more difficult to get good pics looking South.

However I went over to the North Side and just about to set up digiscoping when a fleet of oarsmen came down river , scattering every bird in site.
Still there is always tomorrow
Posted by Citybirding at 15:15 No comments: 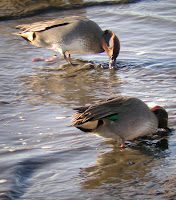 Tide at about the 3.5 meter mark on the way up. Sunny, light breeze.
Birds along the whole length of the water edge.
Redshank, Lapwing, Black headed gull, Curlew and many Teal showing their colours well
Posted by Citybirding at 15:57 No comments: 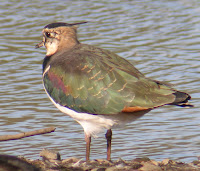 Waters edge was about 50 meters from prom with dropping levels. Opposite Dunston Staithes, birds were along the whole length of the water edge. All the usual suspects Plover-100, Redshank-200, Curlew-3 pair, Golden Plover -50, Teal- 6pair, Cormorants , Gulls-( have to confess to not being confident with Gull identification, but am working on it).
What a bird the Curlew is. Is there a better advert for evolution theory. 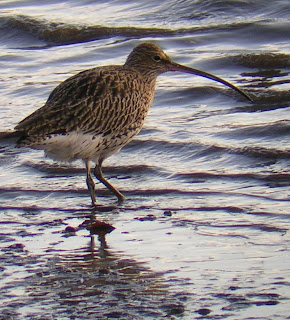 There appeared to be as many birds on the opposite side of the river with the Dunston mudflats holding a large number but too far for me to identify. Must try to revisit this area on different tide heights and understand where all these birds roost when it is high tide.
Posted by Citybirding at 18:43 No comments: